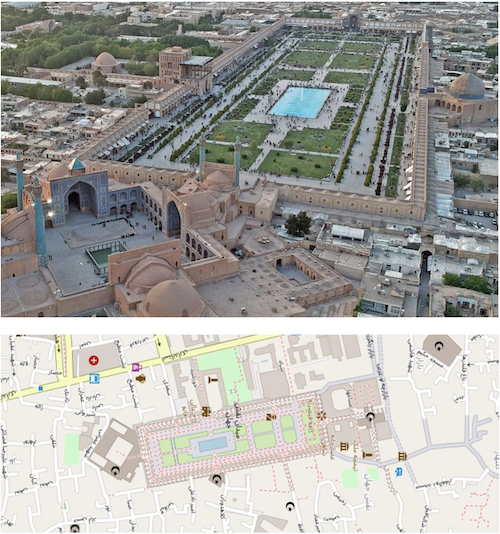 1. Who are you and what do you do? What got you into OpenStreetMap?

We are OpenStreetMap Iran an online, unregistered, and non-profit community. I, Iman Moghimi (OSM user id: Imanmoghimi), personally like the opensource version of everything, so I was curious is there an alternative for business map services? And I found OSM. But for most people and businesses it began about three years ago when Google changed the policy for their map users, and because of US sanctions, we couldn’t use Google map anymore so they start to migrate and using the best option that they had.

2. What would you say is the current state of OSM and the OSM community in Iran?

In my opinion, OSM has grown up but it was unbalanced growth. In most of the western and far east countries OSM is available in detail, but it isn’t right for other undeveloped countries. In Iran our status is good, but we need government and organizations to help us with public data.

3. What are the unique challenges and pleasures of OpenStreetMap in Iran? What aspects of the projects should the rest of the world be aware of?

Unfortunately, we have some copyright issues (users not familiar with OSM copyright or simply not care). We know OSM is open and free. The reason for copyright is more people know OSM. We launched a web page. We listed companies that use OSM and their status on copyright. I think people around the world must be more sensitive about OSM copyright and introduce this project to their friends. it helps more people get involved.

4. What is the best way to get involved? Is there a regular meet-up? A mailing list? Where does the community meet online?

We discuss in a Telegram group. When somebody wants to edit in Iran for the first time a bot sends them an invitation link to the group. We also have a subforum in the OSM forum and people can ask questions. We have no problem with Participation but two things they must follow: first read the OSM wiki specially pages related to Iran, and second write a good Changeset Comment.

5.What steps could the global OpenStreetMap community take to help support OSM in places like Iran?

Training, Translating, and updated satellite imagery. Let me explain. We need to train people and in my opinion best group are the student in age 13-20. they are curious and want to be helpful, working on a teamwork project like OSM can teach them some social skills. Many people in countries like Iran may not familiar with English so we need to translate instructions, videos, and other training materials. Finally, in many remote and undeveloped areas, satellite imageries are out of date. However, I know we use donated imagery but maybe it is a good idea that OSM buys monthly or annually imagery plans under the OpenStreetMap Foundation’s Microgrants program. Also, it could be a way private companies help an undeveloped area too, without paying money that has its own problems

6. Last year OSM celebrated its 16th birthday, so we are well into the “teenager” stage of the project. But what will it look likes when it “grows up”? Where do you think the project will be in 10 years, both globally, and in Iran specifically?

Fundamentally OpenStreetMap is a database and in the next 10 years this database will continue to grow and be used for more than just routing. Rather, every community put their data in it and use it according to their own needs. Also, we see the trend of datamining, and OSM can have an important role in it. In Iran also we can find the undeveloped areas, and focus on them, for example data of BTS antennas on the map can show which areas need more investment to have better internet service coverage.

Many thanks, Iman Moghimi, for this look into the OpenStreetMap community in Iran. A chance to learn about Iran, but also a chance to be reminded that we are a gloabl community all working towards a common goal of mapping the world. I encourage anyone who is interested in learning more to get in touch, and to follow OSM_IRAN on twitter.